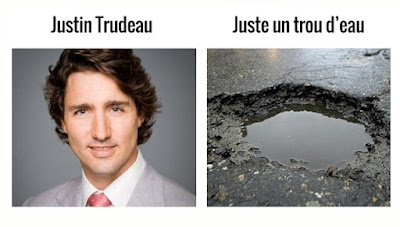 First of all: Fuck you Post Media and your Harper endorsement. I hope your newspapers continue to decline and that all your newspapers go bankrupt. I am a proud non-reader.

Second: Lets have another election and vote on whether or not to revoke Stephen Harper’s citizenship. I want him to have experience as a homeless refugee.

Deep Satisfaction: Reading each name on the list of eight defeated Tory cabinet ministers felt as good as eating a dozen donuts.

Inexperience: Trudeau may be young and he may be inexperienced but I suspect he has advisors that will more than compensate for these perceived deficiencies. His father identified and groomed strong cabinet leaders and he may do the same. It would be wonderful after the stifling prime ministerial style of Adolf Harper.

Vindication: The empty vessel won in my riding with 56.5% of the vote. The NDP woman I voted for only got 20% of the vote, but I can live with myself—but not Tom Mulcair, I am afraid.

I think Trudeau won partly because he is photogenic, partly because of his name and largely thanks to the arrogance and ignorance of Stephen Harper. “Harper lost more than Trudeau won” would be my take. I think the NDP needs to take note and get a charismatic young leader. The “old guard” is dead and I hope Post Media dies with it.


Canada’s air feels cleaner today as it does after a big and energetic storm.
Posted by Chris Tyrell Loranger at 6:07 AM