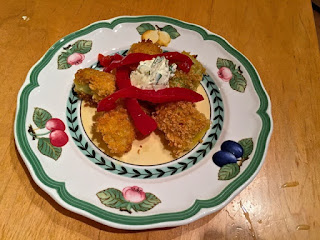 Yotam Ottolenghi's recipe for fried leeks is sensational. It's like eating candy.

He has you boil the leeks first then dip them, cooled and drained, into whipped egg before rolling them in panko breadcrumbs before very briefly frying them. Just like that, they are incredibly delicious. But he suggests you serve it with lemony creme fresh infused with crushed capers, sliced inions and lemon juice. That makes the candy taste even richer. It is to-die-for delicious.

You really don't need the sweet pickled red peppers. This is offered as an appetizer so pickling the peppers adds time to your cooking. Still, they too are delicious but they are mildly sweet. There is sugar in the recipe. I made a double batch and am glad I did. They are delicious alone.

In 1981 a play that was supposed to come into my little public theatre cancelled their reservation and I had a whole in both my program and my revenue budget. Seeing a chance to live a dream, I took a HUGE risk and decided to produce my first professional play.

At the time, I was hosting a bi-weekly amateur TV show for Shaw Cable in North Vancouver. That is how I got the idea for the show I wanted to produce. I wanted Nicola Cavendish to be the star and I could only afford two actors of her calibre. I was integral to the show's shape, script and development; I  had to be. I had 7,000 1980 un-supported dollars in the show—a fortune at the time, especially with as small a house as I had (210 seats).

It was a monster hit but we lost money and I was later fired for it.  By chance, it got reviewed in Variety, the entertainment newspaper out of New York. The review is below. My name is not in it and that hurt. Still, you don't get reviews like this very often, especially on your first time out.

North Shore Live is a two-hander that deserves a long and prosperous life. Its target is a familiar one — commercial television — but the means of demolition are genuinely innovative and extremely funny. The show opened quietly in a suburban house on the north shore of Greater Vancouver and has become the sleeper of the season in a vigorously competitive theatre town.

North Shore Live is the brainchild of two accomplished Canadian performers. Tom Wood and Nicola Cavendish. Wood is a veteran of several seasons of classical theatre at the Stratford (Canada) Festival. Cavendish is a West Coast fixture with wide experience in both contemporary and classical theatre.

In North Shore Live they offer two evenings in the life of a shallow, tasteless local television show. Not only did they have principal responsibility in writing the script, they also are the only two performers — creating a myriad of roles as they delineate the type of personalities who tend to show up on bad evening shows on bad local stations.

The versatile Wood’s impersonations include a punk rock star whose limited brain-power has become even more limited through drug use, a simpering singing nun with aspirations of becoming a stand-up comic, and a cretinous children’s entertainer named Capt. Vic who does inept scenes with a talking octopus puppet names Ollie.

Cavendish, a remarkable comedienne, materializes variously as a hideous child star oozing early childhood sexuality, an instant expert on chickens and a crazed competitor in a game show knows as Passwind.

But the unifying characterizations are of the two television hosts. Wood is Vic Gamble, a preening egotist whose longtime domination of the program is shaken and then shattered by the appearance of a new co-host, Monica van Fleet, uproariously performed by Cavendish as an ingénue with a heart of flint.

The result is a play which not only has malicious fun with the power-plays and fighting which can occur within the television world even at the local level, but which also savages the appalling type of fare which so often surfaces on local video. Kid’s shows, talk shows, cooking demonstrations, game shows — they all get their lumps.

The script is exhaustingly relentlessly funny — acute in its observation and genuine in its wit. The direction by Bob Baker, who also assisted in the writing, is brisk. And the playing of Wood and Cavendish is stunning. The theatre is set up as a TV studio —complete with monitors showing commercials and purported film clips. Wood and Cavendish are on view in these videotaped segments as well — lampooning moronic foreign correspondents and avant guard actresses, even at one point wresting in a vat of Jello.

Specifically local allusions are few. The show has enough of a North American sensibility that it could touch nerve ends anywhere on the continent. It’s brisk, funny and continuously innovative.