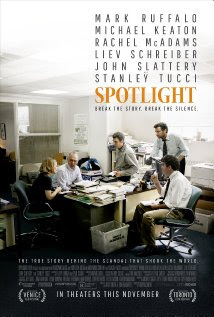 I watched Spotlight this afternoon. Here is how it is described:

Spotlight tells the riveting true story of the Pulitzer Prize-winning Boston Globe investigation that would rock the city and cause a crisis in one of the world's oldest and most trusted institutions. When the newspaper's tenacious "Spotlight" team of reporters delve into allegations of abuse in the Catholic Church, their year-long investigation uncovers a decades-long cover-up at the highest levels of Boston's religious, legal, and government establishment, touching off a wave of revelations around the world.

I was raised Catholic. I do not go to church; I stopped when I was thirteen. I am now almost sixty-eight years old.

People applauded at the end but I was crying. They were, I believe, clapping because they were happy that the Church and its partners were caught and exposed by the Boston Globe and this film. But I was sad. I fled in teats for the victims and the betrayal so many devout people must have felt.

What it reveals is truly shocking and terribly upsetting.

It really hurt to watch. I definitely identified. I felt abused by the church, not sexually, but as an orphan in their care. They differentiated between “innocent” orphans who were orphaned by war, and us—the products of illicit sex. The Church and society protect adults and children suffer whether they are illegitimate or abused.


When an institution that stands for acceptance, kindness, caring and honesty before God betrays its most innocent members—and systematically—there is no greater shame.

As for the movie: I was hugely impressed by Rachel McAdams whom I have never seen before. Her performance is fluid and believable at the while she is on screen. The ensemble work is quite believable.
Posted by Chris Tyrell Loranger at 7:07 PM