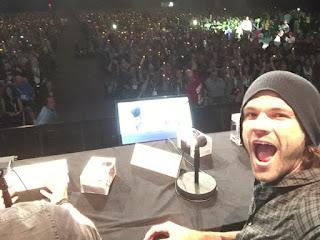 Jared Padelecki is an actor from the US who is living in Vancouver whilst filming one of those stupid television shows about vampires or zombies or whatever, and one day after filming a scene he went to his trailer and had a breakdown in his trailer. A doctor was called and Mr. Padelecki was diagnosed with clinical depression. Filming was halted for two weeks.

Mr. Padelecki Tweeted an apology to the fans of his show that was eloquent in its revelations about depression. It included the phrase "always keep fighting" and it became the catchphrase of a campaign he undertook to support To Write Love on Her Arms, an organization that supports people dealing with depression, self-harm and suicide.

The photo above is of the audience at Comic-Con in San Diego that lit candles to acknowledge the actor's illness and his campaign.

I, being someone so down on social media and the lack of values in people today, found this photo and Mr. Padelecki's story, writing and action to be uplifting—the perfect antidote to my cynicism.
Posted by Chris Tyrell Loranger at 8:55 AM