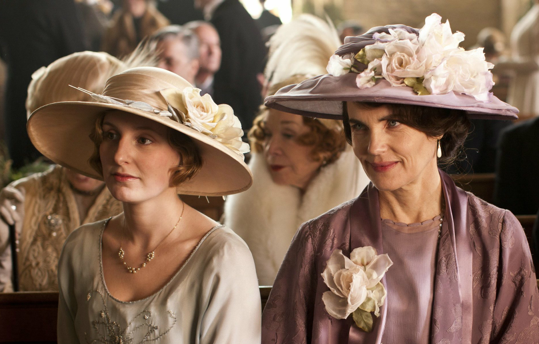 Ethel asks Lady Cora, "Mama, can I ask you something?  You don't think I'm bad, do you?"

Cora: "You're a little sharp tonged every now and then, but bad, no."

Edith: "Sometimes I have bad feelings."

Cora: "We all have  bad feelings. It's acting on them that makes you bad."

What a timely concern because I am turning into a big "C" word. I am becoming a curmudgeon—but not the nice kind as in the movie, Up; instead, I am grumpy, bring life to the word's original meaning. I not only cannot suffer fools, I don't suffer many at all well. Have I changed, I wonder, or is this new awareness due to my increased exposure to the multitudes on the street, in busses and on the subway?

In South Africa, three times!, my first glimpse of someone led me to instant and extreme aversion to them and later, not only did I come to realize that these people were generous and kind individuals, they  all initiated acts of generosity to me! I am sure to rot in Hell.

Yesterday morning I went to do some ironing whist watching THE OLYMPICS. YAY!! And soon after plugging in my new Rolls Royce iron, I smelled what I thought was cooking corn. Then I smelt a  burning smell and with every swipe of my iron I found black lint on my clothes. Then I realized the black flakes were coming from inside the iron…. wait for it….

Then I, resident on the seventh floor, realized the the entire global population of these teeny weeny ants were living in my iron. I was able to get a lot of them out by turning the iron upside down and shaking it, but I had to shoot steam through it for half an hour to get all the ants from inside the plumbing of the iron. Imagine!


Posted by Chris Tyrell Loranger at 6:01 PM
Email ThisBlogThis!Share to TwitterShare to FacebookShare to Pinterest