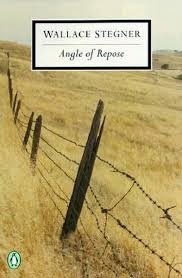 Wow! I read Angle of Repose by Wallace Stegner and am still not over it.

I took my degree in English literature. In fact, I took 2 extra courses a year while at college and became deeply immersed in it because it was easy and relatively fun. It wasn't absolute like the sciences. And the end result was  … are you familiar with the song "nothing" from A Chorus Line?


And I said… "Nothing,
I'm feeling nothing,"
And he says "Nothing
could get a guy transferred."

They all felt something
But I felt nothing
Except the feeling
That this bullshit was absurd.

So after college until about ten years ago, I read non-fiction exclusively—a lot of it and I loved everything I read. I read everything by Oliver Sacks and Simon Winchester. I loved historical biographies like Stacey Schiff's Cleopatra.

Then, a decade ago, I awoke as out of a fog. No more non-fiction for me. I can't remember many titles from the beginning of the resurrection of my poetic soul, but I do remember binging on P.D. James, having discovering her whilst travelling in India. What I do remember was Jamie O'Neil's At Swim, Two Boys. That novel affected me so much a friend asked me if I had been to Ireland because of the way I was speaking.

After a book like that, it is hard to keep reading. I want every book to move me as At Swim, Two Boys did but it takes a while. And then came Adam Vergese's Cutting for Stone and the earth moved again. and with these two books, not only did my earth move, it never returns to the same place again.

Well, now I have (regretfully) finished Stegner's Angle of Repose. Oh my God, what a book. I still miss Susan Burling Ward and Lyman Ward, but they will live with me forever. And if anyone had suggested I read a book about the settling of the American West, I would have never given it a second's thought. No way. But this book got a grip on my soul right away—both the story and the writing is arresting. God bless writers like O'Neil, Vergese and Stegner.
Posted by Chris Tyrell Loranger at 6:50 PM
Email ThisBlogThis!Share to TwitterShare to FacebookShare to Pinterest