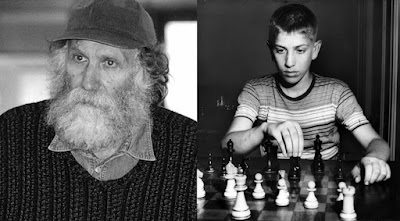 Last night Bruce and I debated the nature of “genius.” I had read an account of the afternoon of the day Bobby Fischer was to fly to Reykjavik, Iceland to play Boris Spassky for the chess championship of the world and I relayed some of the juicier bits of the story to Bruce.

When Bruce referred to Fischer as a genius I disputed the accreditation. I think he is a savant and not a genius. To me, a genius must be sane and participate in the assimilation of her or his arsenal of knowledge. I told Bruce that I believed genius without sanity is flawed and cannot be categorized with the genius of an Einstein or a Beethoven.

Fischer spent the last twenty years of his life in exile. He chose to play a rematch against Spassky in Yugoslavia during a UN embargo against the nation. When the US Treasury advised him that he would be violating a Presidential order and become a felon if he played the matches, Fischer famously spat on the order in public. Consequently, his passport was revoked and he became stateless.

His move was typical of his behavior his entire life. He held himself above the law and the rules of every agency, organization and human being on which, or whom, he depended; hence my disregard for his “genius.”

He was unlikeable. He abandoned his mother, and was estranged from his sister. After the match in Yugoslavia, he went to Japan, then Hungary and eventually settled down in Reykjavik where he died of renal failure. And while in Iceland, Fischer a (former) American and a Jew, reclaimed the spotlight by broadcasting several anti-American and anti-Semitic rants on the radio. Most famous of these broadcasts was his reaction to the 9/11 attacks on the US:

“I applaud the act. Look, nobody gets … that the U.S. and Israel have been slaughtering the Palestinians…for years…. The horrible behavior that the U.S. is committing all over the world… This just shows you that what goes around, comes around even for the United States.

What good is genius in a person incapable of a human relationship? He never coached, mentored or encouraged any other chess player. He took and never gave. He trusted no one and was incapable of friendships.

He only adopted habits of hygiene and wore respectable clothes after being counseled to do so. His mother, the US Chess Federation, all his opponents, his lawyers and agents all suggested to Fischer than he get psychological counseling. His said he would go if the counselors would pay him for the privilege of having access to his mind.

Certainly there were acolytes—especially in Iceland at the end of his life. It was easy for people, especially Miyoko Watai, to warm to a former highly accomplished chess grand master who was incurably sick and in need of care. And it is easy to dismiss his horrid denunciations of every agency that supported him and of his faith if you accept that it was a product of illness.

Joseph Ponterro has written a compassionate and balanced article about Fischer's mental health in Pacific Standard. You can read it here. He deduces that Fischer had genetically predisposed paranoid personality disorder. It would explain everything and excuse all the negative aspects of his behaviour. Ponterro wrote about Fischer to make a point: People like Fischer need support.

When he was young, Fischer loved chess to the exclusion of all other things. He quit school to obsess on chess. At age 15, Fischer became both the youngest grandmaster up to that time and the youngest  candidate for the World Championship. At age 20, Fischer won the 1963–64 U.S. Championship with 11/11, the only perfect score in the history of the tournament. As an adult, however, it took a team of people with incredible patience, cleverness and even a capacity for deceit to get Fischer to his matches.

"We" exploited Fischer's talents but left his deficiencies untreated. His story raises many tough questions though: Can you force treatment on someone? We certainly can and do when a person with mental illness commits a crime, otherwise we only treat people who give consent. Would Fischer have been as brilliant a chess player if he had received treatment? No one knows the answer to that question. It's a scary question to many.

Is he a genius? Not to me, But he had a genius talent. Do I split a hair here? What do you think?
Posted by Chris Tyrell Loranger at 8:24 AM