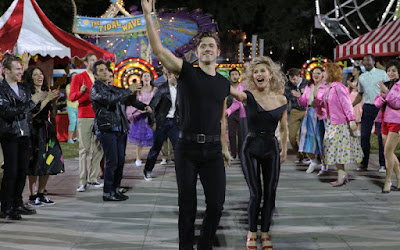 The ultimate winter couscous was, as expected, incredible. Spicy and flavorful, it was a total hit with both Leslie and me. Regarding Mr. Ottolenghi; I haven’t met a recipe yet that I didn’t love. We had a lovely afternoon cooking and eating it and watching The Sapphire Girls, a fabulously feel-good movie starring the sexy and wonderful Chris O’Dowd.

Leslie left very late in the afternoon. I came back upstairs to clean up with no plans, but in a very contented state because I had delicious leftovers to eat and I love being at home on Sunday nights. I did not know that Grease Live was on television.

But I happened on the program, turning on the TV just as Jessie J was doing her opening number and BOY, I am so glad I did. Grease Live was amazing. Directed by the man who directed Hamilton on Broadway, I was glued to my seat. I have not watched a TV show without pausing for years but this show demanded my attention.

It was performed outside and in and the staging was brilliant. Sometimes the director included shots of his cast bundling into carts to race to their next scene. Vanessa Hudgens played Betty Rizzo. She did an incredible job — remember this is live — on the day after her father died.

The emotional highlights of the night were every scene with Didi Conn who played Frenchy in the film. She appeared as the malt shop waitress in this televised version of the show.


I was arrested from the get-go. Jessie J’s opening was wonderfully performed and brilliantly conceived. It was Shakespearean, seeing everyone in character before the show starts behind this brilliant musical prologue.
Posted by Chris Tyrell Loranger at 7:20 AM