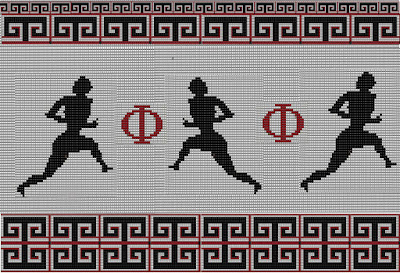 I built a grid to create designs for my lamp project and because when I was a kid, the first gift I ever got that really amazed me was a cast from the National Museum of Antiquities in Athens. My cousin, Ann, had moved there with her husband who was the Canadian Trade Commissioner. That gift "shone alight" into the world of ancient Greece and Rome and it led to me studying Latin and Greek and Roman history.

Now I am colouring each little dot, representing a bead, to make my design. The scale is off here. I will shrink the geometrics and enlarge the runners a bit.

The image above is crudely assembled. I did the two borders separately, and each runner and letter separately and then mushed them together. The colours are not right either, but I have the beginnings of a design. I plan to keep the borders. I'm not so sure about the runners and letters.
Posted by Chris Tyrell Loranger at 12:06 PM
Email ThisBlogThis!Share to TwitterShare to FacebookShare to Pinterest