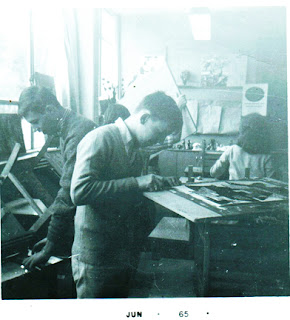 This is a photo of me taken in the art room at my high school. It was taken the month I graduated. When I graduated I had hair.

The photo was a gift from my high school sweetheart, Leslie S. She gave it to me last Saturday at our 50th reunion. At our 40th reunion, she gave me the ring I had given her to wear when we were in grade twelve and going steady.

Yesterday I wrote an email to her. I titled it: I Have Great Taste in Women and in it I told her how beautiful she is and that I still love her to bits. She is, and was, the best of women; she still is resplendent to my eyes.

•
In elementary school, the person I admired most was Mike P. I think my admiration was tinged with a little fraternal love. I desperately wanted a brother (but any sibling would have done). He was someone I admired from afar, however, we were never friends. And then we graduated and I never saw him again. Until this past April.

In April, he volunteered to join those of us organizing our reunion and that is how he heard about my play. He emailed me to say he was coming to see my show. It was both a thrill and a total shock because I had stopped going to the reunion organizational meeting during rehearsals and the run of the show.

It was serendipitous because there was a line in my autobiographical show inspired by Mike! I kid you not! This is the line: "I became an assimilator, creating a self by making choices from the palette of human behaviours I saw around me." I so admired Mike that I consciously incorporated aspects of his deportment into mine. I was delighted to be able to tell him about my early admiration.

At the reunion, as things were winding down, I left early and so I made the rounds to say goodbye to a few people. Mike was not on my list but he was near someone to whom I was saying goodbye and I suddenly found myself facing Mike. He had his large hands outstretched and had grasped me by the shoulders.

He looked meaningfully at me and said some nice words and then I left. As I walked to the bus stop I gave thanks to God for making one of my earliest dreams come true: I am now good pfriends with Mike.

Posted by Chris Tyrell Loranger at 7:25 AM