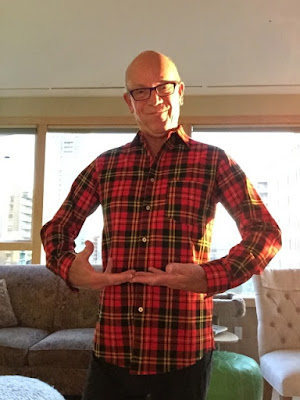 In just over two weeks, I will be co-hosting the 50th anniversary reunion of our 1965 graduation from West Vancouver Secondary School. It is my second time “at bat” as host. Last time, it was I alone; this time my co-host is a fabulous guy, Brian Keating, with whom I went through elementary and high schools. He is a great guy. I am sure we will have fun.

For intramural sports, the school was divided into “Houses.” There were four: Macintosh (Tosh) and Ross were two of them. I cannot remember the name of the other two but they, as well, were Scot clan names. Our school colours were the Wallace tartan, hence the shirt I am wearing in the photo above—it is made of Wallace tartan. I happened on it in a store and could not resist it, given that I am co-host of the event.

My first time hosting was the 20th reunion. I declined to attend the 10th annual event without a second thought. I loved school but always felt like an outsider... a bit of a loser, with my shameful secret that I was gay, so not attending the 10th was a no brainer. But when the 20th came round, a woman from my class called me asking me to help organize it. Her name was Linda.

Linda was even more of an outsider that I was and I could not say “No” to her, and on my arrival the assembled organizers welcomed me by telling me I would be host. I was shocked. I remember saying: “I am Chris Tyrell, you know, not Chris Green.” Chris Green was enormously popular at school. But they knew they wanted me.


That was in 1985; I was 36 years old and their overwhelming warmth and their desire that I host the reunion had me wonder, for the first time in my life, if maybe I wasn’t such a loser after all. It was a turning point in my life. This time, when I host, I intend to somehow give back.
Posted by Chris Tyrell Loranger at 7:13 AM
Email ThisBlogThis!Share to TwitterShare to FacebookShare to Pinterest