Life With a Well


Today was the first day of real rain since I moved here. I thought: What’s that noise? It’s the rain falling on my tin roof and I love it now that I know what it is.
Ironically on the first day of rain, I had no water. I couldn’t shower or wash the dishes or flush the toilets.
I called the plumbing company that was here yesterday and Jamie and Don were here within a few hours. It turns out my cistern is empty and my cistern alarm is broken so I was out of water. It had nothing to do with Burt’s work yesterday.
I’m on such a learning curve; I’m now being forced to learn the system that so alienated me at first sight.

I ordered 4,000 gallons of water. It came at 3:00 from Nanaimo. And then once the cistern was full I had to switch to drawing water from the cistern instead of from the well. I had all the switches marked that J&D told me had to be turned on or off and still I had no water (even though the cistern was now full).
No water pressure: I decided that meant there was a problem with a generator so I set out to try to figure out if and where there was a generator in the maze of water equipment that I have. And I did!
By 4:00 I had normal water pressure. I celebrated with pie. Duh.
I took Sheba in the car to town to fetch her some toys and food and she hated being in the car. She hated being left, worse. But I know she will adapt quickly because today she asked to go out to pee. 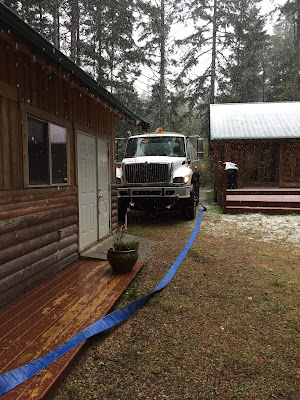 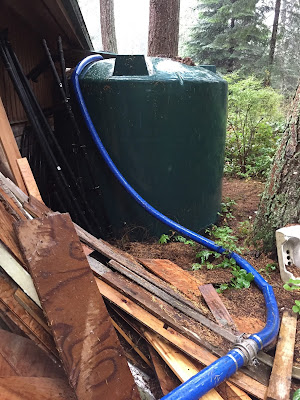 Posted by Chris Tyrell Loranger at 5:43 PM
Email ThisBlogThis!Share to TwitterShare to FacebookShare to Pinterest