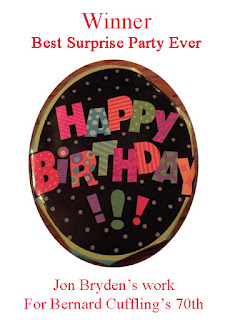 What a fuck of a guest list: Allan Gray (Actor; friend), Christopher Gaze (artistic director of Bard and a friend) and his fabulous wife, Jennifer Bruce (a close friend), Dean Paul Gibson (one of the funniest, guy’s I know), Jane Mortifee (a dear friend), Bill Millerd (mentor, friend and former boss), Chris Allan (hilarious friend), Patti Allen (an actor whom I LOVE), Wendy Gorling (actor and long-time friend) and her hubby, David Cooper (whom I adore), Nicola Cavendish (an actor and true soul mate) and three people I don’t know well but are great, warm acquaintances: Kathryn Shaw, Pam Johnson and Stehanie Hargreaves.

All that … and booze with dinner. And our dinners were pre-paid and the menu fixed thanks to all the organizing by our host; Jon Bryden. We assembled to celebrate the birthday of a stage institution here in Vancouver—Bernard Cuffling.

You don’t assemble a party like this very often: Vancouver’s two largest theatre producers plus many of the finest local actors of my generation—all here in the town in which I was born (of an actor).
This is what life is for. Jane sang, people told stories about Bernard, the waiter was Hollywood handsome and a real treat AND … we had our own private room for the party.

It was a surprise and you could see it on Bernard's face when he arrived. And the delightful miss Patti had brought whistles and hats for us. It was a total wonderful blast. 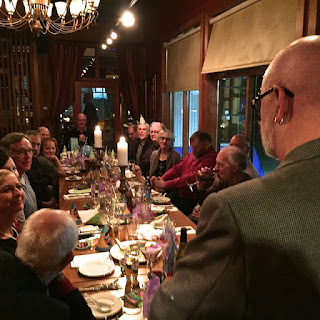 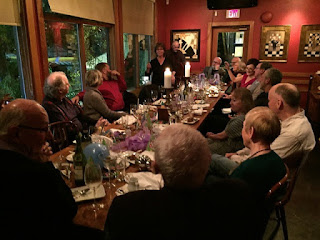 Posted by Chris Tyrell Loranger at 8:16 AM