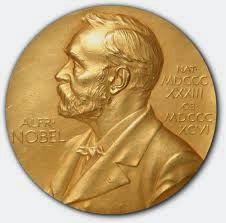 
An unheard of Canadian has stunned the international medical community, his nation and the world by winning both the Nobel Prize for Medicine and the Nobel Peace Prize Loranger, 67, was recognized for developing the medicines produced at Eupharma, a corporation he founded late in life.

Eupharma products simulate the meditative state. More importantly, they render worldly allegiances to religions and the state secondary to a primal human allegiance to a universal loving God.

“When I was in Tanzania I saw a wailing baboon emerge from the bush carrying her stillborn baby by the ankle. When she reached the road, she squatted down and all the other baboons surrounded her—the closest ones laying their hands on her,” said Loranger on accepting his award. “When I saw the power of touch, I knew immediately how to end all human conflict.”

Patients taking Eupharma products create brain waves identical to those created by shamans in deep meditation and describe their feeling as being similar to a post-coital or most-massage state. They describe a sense of emotional fulfillment that eradicates anxieties, regrets and/or fears and leaving patients in a clear-headed, focused and productive state.

Tested in communities where there have been generations of conflict and no growth, there is now peace, unity and remarkable growth. During clinical trials of Euphoria products in Israel, Palestinian/Jewish conflicts disappeared.


The two million-dollar prizes will allow Loranger to work on his next focus: Human intelligence. He wants to find a pharmaceutical solution to stupidity next. Contacted at his home today he was asked how he was going to celebrate: “I am going to make anatomically correct gingerbread persons for Christmas gifts.”
Posted by Chris Tyrell Loranger at 8:33 AM
Email ThisBlogThis!Share to TwitterShare to FacebookShare to Pinterest