When I was a kid, as I have often written here before, things were not great at home and when they weren’t I would often find myself alone in my room where my feelings could overwhelm me in private.

Obsessed with my feelings I was blind and numb to my surroundings. Until I could stop thinking about what was bothering me, I was safe in my room. But I was in pain.

When I started falling in love with others, the objects of my affection could send me back to that emotional place introduced to me by my parents. I called it Disappointment Land. It’s where I would “go” to lick my wounds; that’s how I understood it.

Then one day I had an accident and both my arms were broken and Dr. Spohn and I wound up having an interesting talk while he put the casts on my arm. He said his patients were either “avoiders” or “indulgers.” Some patients, he said, did anything to avoid thinking about their pain. They were stoic carry-oners who used distraction as a coping mechanism and there were those who “went into” their pain to cope.

I realized I was in the second group. I would focus on the pain. I felt by focusing on the pain that I could “get control” over it and it seemed to dissipate. I would focus on my breathing too to make the pain rhythmic. I would “let’ it hurt more as breathed out, and it would hurt less as I breathed in. I did the same thing with emotional pain.

I often wondered how different I would be if I had a sibling. I grew up in a war zone; my parents were the enemy. It wasn’t that bad, but in my world of extremes it felt like war. I was very “sensitive.” If I’d had a sibling, I would have had an ally. I would have talked out my issues.

Home is supposed to be a safe place. Mine was not, so my room became my safe place. And this is funny considering I turned out to be gay: I spent a lot of time in my closet. It had a window and being alone in there behind a closed door and being quiet as a vacuum gave me comfort. I was sure that if the enemy came into my room, they might conclude I’d gone outside.

Once, many years ago, I called my friend Ross to invite him to dinner. He declined my invitation because, he said, I picked on him and he was right, I did. For some reason, I did do that, but I really liked Ross. So I acknowledged my behavior, apologized sincerely and said to him, “Now, shouldn’t you come to dinner and give me a chance to change? And if I fail, then you can dump me.”

Ross came to dinner and I have never, ever, once picked on him. We remain good friends to this day and on the tenth anniversary of that event, I took him and his wife out for dinner to celebrate our friendship and our success at overcoming a challenge.

I mention that because I was not offended by my friend’s criticism yesterday. My experience with Ross tells me that I can make constructive use of criticism.

I felt ambushed by my friend.

This is funny: When my dad was demented, his doctor told me not to worry about his delusions or to correct them, but to work with him. He said doing so would make my father’s existence a happier one. So I resolved to do as the doctor said.

One day, my dad asked me to revel with him in the view of the Fraser River with him that he saw out his window at St Paul’s Hospital. There was no river view from his room, but I said I thought it was lovely.

“You fucking faggot liar,” he said and he lunged at me. I was in my fifties and all the emotions of my thirteen-year old scared-to-death self came back and filled me up and I fled to Disappointment Land.

Yesterday when this friend called to express disappointment in me for saying something we had discussed comfortably several times before, I felt I’d seen the green barge and off I went to Disappointment Land.

And here’s the point of this post: I had an odd response to finding myself back in Disappointment Land: “Oh, I remember this place. I’ve been here before.”

It actually feels good to be back. I feel confident here now and I know how to survive here. My friend and I will work things out, but yesterday I turned off my phone and put it away. I decided to go on retreat to Disappointment Land because now my island isn’t barren like my closet; it’s fully loaded like my condo. 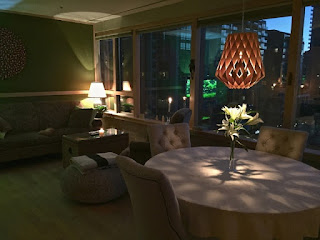 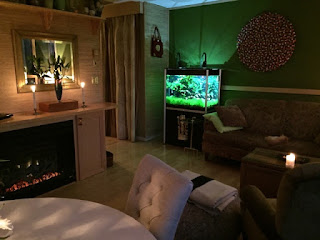 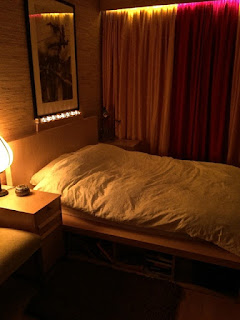 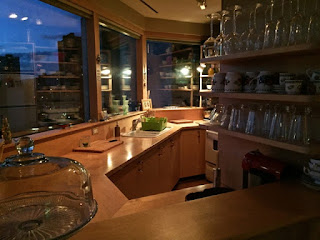 Meanwhile in another part of the world, Steve, my ex, woke up to the view below. He took the photo from his hotel room in Tahiti where he flew in order to catch a flight to Easter Island where he will celebrate his 60th birthday. He will return to Tahiti after his stay on Easter Island for a longer visit. 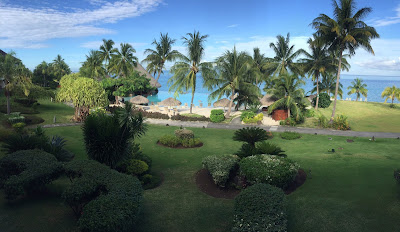