My friend, Dwayne, took me to lunch on yesterday at le Crocodile, one of the finest places in town. Not only that, I discovered that his sister-in-law owns Bobloi — the place I got my fabulous new coat and a really smart men’s store. So now, I am on their annual “friends and family sale” guest list. Yes!
•
The movies I watch on Netflix are inspiring me. My screenplay, Uncle Gus’ Monkey, is a plot-driven movie. It has some good visual images and decent dialogue but there is virtually no cinematographic language in it; its worth lies in its quest plot.

Nextflix has exposed me to a vast international film library that readily facilitates re-watching scenes. Consequently, I am learning a lot about screenwriting. I still have no desire to invest a major writing project as I have of my recent past, but learning is a rewarding pastime.

I just watched Rust and Bone. It stars Matthias Shoenaerts and Marion Cotillard. She is amazing and the film is spectacularly directed and shot — listen to me talk like I know what I am talking about! A film cliché is the rolling wheel, or the passing lines of paint on a road to imply time and distance. In Rust and Bone, the camera is at the level of a hubcap and looking forward. It is unusual and it’s edgy. You feel too close to the road and I loved it.

Marion Cotillard is human Plasticine. Her range is stunning if you compare her totally believable fixer of illegal street fights in Rust and Bone to her performance as Piaf in La Vie en Rose.

Mr. Shoenaerts, introduced to the world by his role as the street fighter in Rust and Bone, has yet to impress me. I also watched the recent Far From the Madding Crowd that stars Carey Mulligan in which he plays Gabrielle Oak — essentially the same strong, stoic, tough, silent character he plays in Rust and Bone.
•
I love animals but most media entertainment about animals contains aspects of their life I don’t want to see. I have to be selective about the animal sites I visit, too. Many exploit horrid photos and stories with which to fundraise.

However: Yesterday I learned that only domestic cats meow and only to their humans. Meowing is not part of cat vocabulary in the wild. It is behavior they learn as kittens to trigger the attention of their mother in the wild and, once weaned, they never meow again. Domestic cats, however, see us as mothers so they meow to us. 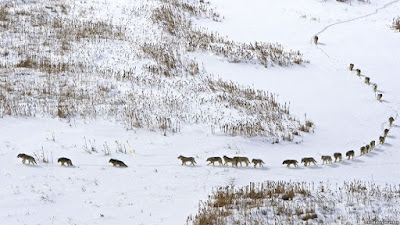 I also read an analysis of this photograph by an animal behaviorist who specializes in wolves. Here is what he said about this photo:

“The first three are older and/or sick. They will set the pace for the pack so as not to be left behind. Conversely, they are sacrificed if ambushed.


“Then follows a group of the strongest males. Here, there are five. In the centre is most of the pack including all the females and pups. Then, behind the pack, is a second group of strong males. Again with this pack, there’s five. Alpha wolf is last. He goes alone. From the rear the Alpha can see everything and control everything.”
Posted by Chris Tyrell Loranger at 11:07 AM