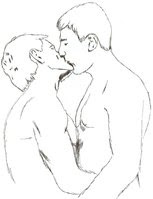 It has been positively shocking to wake up to thick clouds. The sky is almost yellowish now but an hour ago there were large and very dark areas. There is no indication that it will rain. I have a walking date at 9:30 with friend, Cathy. We will walk the wall together. It will be nice if the sun is behind cloud. It will be refreshing. Sadly, I don't think there will be any rain.
•
It was really hot last night. I was worried about sleeping so I decided to walk to the park and back down a quiet street. I got to the park just at dusk and passed a major “police incident.” Downtown was buzzing.

At the park, a very handsome man, bespectacled and totally bald—shaved bald—and possessed of a striking resemblance to a Buddha or Mr. Clean asked me for directions to “the bridge in Ceperley Park.” Why in Hell would anyone go there, I wondered. But I explained to him how to find the bridge.

He clearly did not understand, so I offered to walk him there and somehow, when we got there, we wound up kissing and having a very romantic interlude. I was uncomfortable with his public affection the darkness gave me the courage to respond and, besides, we were far from the people walking nearby.

He leaves today on a cruise ship, so there could be no second date. But after his friend arrived to meet him, I walked them back to their hotel hand-in-hand with my new friend Kim.

It’s been too long to remember when I had a similar experience, but that is not the point of my story. My point is this: While we were necking in the dark like teenagers, I became aware of all the social changes that have occurred in the decades since I last experienced any public affection from a man.

I realized my embarrassment was old school. Today, with gay marriage legal in all of North America, the affection I was enjoying with Kim on that bridge need not cause me concern any longer, so I let go of all my fears. That was a good experience to have before I die.


Then, when I came home, still unable to sleep, I watched a 1966 episode of Silent Witness that I had taped and it concerned a gay man and the homophobia I lived through in my teens. It was an emotionally interesting evening!
Posted by Chris Tyrell Loranger at 7:21 AM