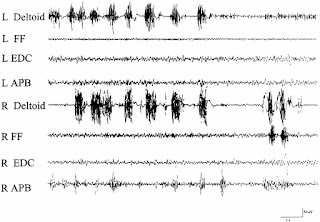 Some people like to have maps on their wall onto which they put pins into each country they visit. Me? I like to see how many diseases I can get. I'm kidding, of course, but I do have a few doozies such as Prinzmetal Syndrome and Todd's Syndrome.

Prinzmetal is the name given to a condition that has the walls of the coronary artery going into spasm and that causes a heart attack. I have had two. Todd's is a condition related to being Migrainous. it causes visual hallucinations.

I also have a condition called Myoclonus. Myoclonus is spasm of a muscle or group of muscles. Myoclonic twitches or jerks usually are caused by sudden muscle contractions, I have negative myoclonus—my muscles spasm when they relax.

I only usually have muscle spasm in my calves and it almost constant, probably due to all my walking. But systemic myoclonus involves spasm of all the muscles in the body. I have had it once so severely, I was diagnosed with epilepsy, but normally I just have one massive convulsion and always when I have laid down to rest.


This morning, as is often the case, Leon came to lie down on top of me when I decided to have a little mid-morning nap. I was tired from all the cooking and cleaning last night, and shortly after lying down it hit: A huge single sustained convulsion and poor Leon was launched into the closet.
Posted by Chris Tyrell Loranger at 12:46 PM