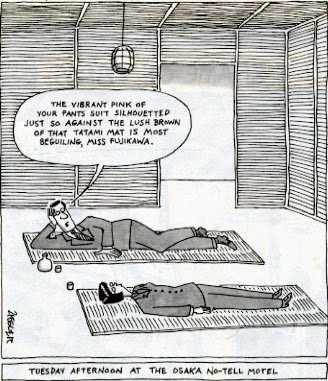 What the f-ck is going on?

The other day, I dug into the Sept. 15th New Yorker. First of all, I never read the listings or the fiction. CAll me stupid, but that's me, and I am far, far more than satisfied with the rest—especially the cartoons like the one in this issue like "the underbelly of Vegas fountains" or "I'll agree to a pre-nup if you'll agree to a non-compete clause." Brilliant, no?!

"Comment" usually bores me because it is about American politics, but this whole issue bored me. What the f-ck is going on? The shorts bore me, the Bill Cosby and Al Pachino articles were way too much information about two people I wanted no information about, "Shouts & Murmurs" bored me as it often does (but when it doesn't, it kills) and even the medicine article bored me and usually I find the New Yorker medical articles beyond fascinating.

The article about the unionization of fast food workers was interesting but even it couldn't hold me through to the end. My voice issue and pending doctor appointment may have been working against my ability to concentrate. The article  on Walter Benjamin, Theodor Adorno and pop culture bored me and who cares about TV shows even when Emily Nussbaum is writing? The film reviews were of films that repel me and even the Cartoon Caption Contest was lacklustre.

Is it the magazine, or is it me?
Posted by Chris Tyrell Loranger at 8:32 AM