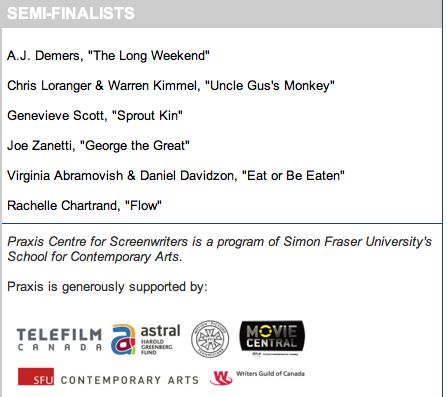 Poor Warren. I called him when I got the news and left a message. I sent him the email with the notice in it as well, but he neither read it nor listened to the message, so when he called, I answered with: "Hello loser."

I knew. Even as I wrote the last post, I knew. I knew because I knew the finalists were determined on Friday and no one called on Monday to go over wording of the log line or our bios before the announcement on Tuesday. Still some hope wouldn't die because I could not be certain of their procedures.

We were second on the Runner-up list. That means we were tenth of however many scripts were submitted (120-150). Considering I did not know how to write in this most demanding of formats, and considering I was writing in a new form and new software, I am terribly proud of our position. I had donuts with which to celebrate when Warren arrived for work.
Posted by Chris Tyrell Loranger at 6:37 AM
Email ThisBlogThis!Share to TwitterShare to FacebookShare to Pinterest