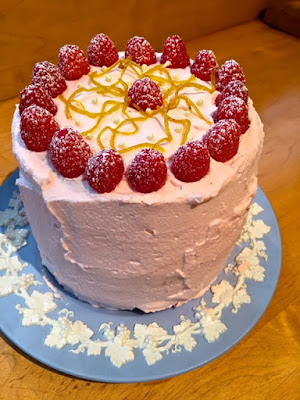 Yesterday I went to VGH again, this time to check on my lungs. During my anxiety attacks, I’ve been experiencing a scary shortness of breath. The last part of the visit involved a kind of “breathalyzer” test I have had many times. I hate it and I was dreading doing it. I was supposed to do three blows into the machine but after the first one I was a wreck so they exempted me from the other two. I go to St. Paul’s for more tests next week.

Dr. Shoja called and can see me next week, thanks to a cancellation and I already have an appointment for the week after that.

I am really exhausted from all this anxiety. It is like carrying a huge load on your back.

I made a tall génoise cake. What an epic piece of work.

I only have one spring-form pan the right size, so I had to make two cakes to get the height I wanted. Then I made the raspberry filling to put between two of the four layers and then cooked up some lemon curd to put between the other two layers. After that, I had to make Chantilly for the icing. It should look fabulous when it is sliced.

But by far the worst part was making the candied lemon rind for the top.
Posted by Chris Tyrell Loranger at 5:04 PM
Email ThisBlogThis!Share to TwitterShare to FacebookShare to Pinterest