(There's a video above. I'm having trouble seeing it on Safari but I can see it on Firefox and Chrome.) 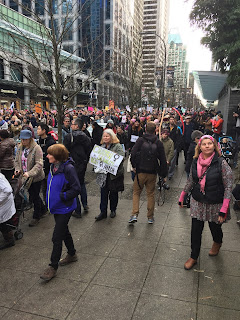 On a whim, I decided to walk to the Trump Hotel to see the protest. When I got there, the street was empty from west end of the street to the hotel—and this is Georgia Street, perhaps the city’s foremost street—but there was a crowd outside it’s façade that extended to the east end of the block. What I did not realize until the march got started, was that it continued around the corner and forever after that. There were an estimated 15,000 people marching.
It was thoroughly civilized; there was no violence and not only that, it was a total love in. I kept tearing up with pride in my city, its people and in humanity everywhere standing up to the idiot today. Yes, it was a protest, but it was uplifting to see your values reflected in so many brilliant hand-made signs, none printed by machine.
There were turbans, strollers, walkers, a hat that said “think out side my box,” a brilliant marching orchestras, costumes and everyone wearing a smile. It was fabulous.
Posted by Chris Tyrell Loranger at 3:38 PM