I did nothing all day Thursday, except enjoy myself. I did not feel like working. Instead, Sheba and I went to Sandwell Park (and beach). It was my first visit of the year to that beach and it felt lovely to be back on its expansive shore. The tide was too far in for all the exploring I wanted to do; still, it was lovely to sit in the shade for a while to just relax in such a setting. (See below.) We had the entire beach to ourselves.
I did, however, steal a small Ocean Spray plant. It grows wild everywhere here and I want one for the back of the Fern Garden (that I don’t seem to be able to get started on). I’ve been looking for one on my walks for days.
After the dog walk this morning, I’ll do some yard work today (I think). I’m going to try to be diligent.
•
I’m watching a terrific program on Amazon Prime. It’s called Good Omens.  It’s written by Neil Gaiman and is terribly clever. It stars Michael Sheen and the absolutely incredible David Tennant. I was laughing out loud often at Mr. Tennant; he’s a performing genius, I think.
It’s spectacularly produced and has some geniuses in the supporting cast—Miranda Richardson and Daniel Mays. And funny! Oh my God!
•
I’m going back to the big island tomorrow with Sheba. We’re going to meet Jane and Dana for a dog walk on the Qualicum beach and then we’ll have lunch together on the patio of a beach restaurant we enjoyed together last year. And on the way home, I’ll go back to Walmart for more cheap soil.
Soil on the mainland was, on average, $20 per cubic yard. Here its $110 delivered; it’s $76 delivered, if I buy six cubic yards (but that’s a lot of soil). So I buy it in transportable bags. The nursery here sells bags for $9; the hardware and garden store has some for $7. At Walmart, they are $3.
If I get all my soil form Walmart, mix it with soil stolen from next door and add some peat moss, I can probably landscape the unfinished part of my backyard—roughly, inexpensively and good enough for me. 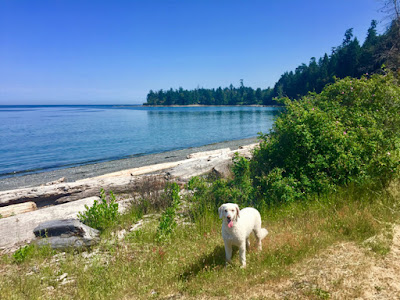 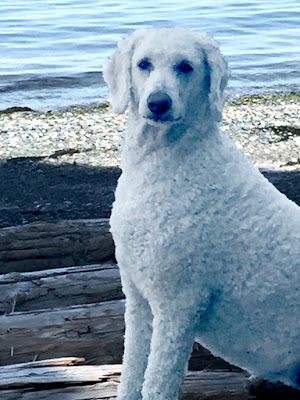 Posted by Chris Tyrell Loranger at 6:50 AM