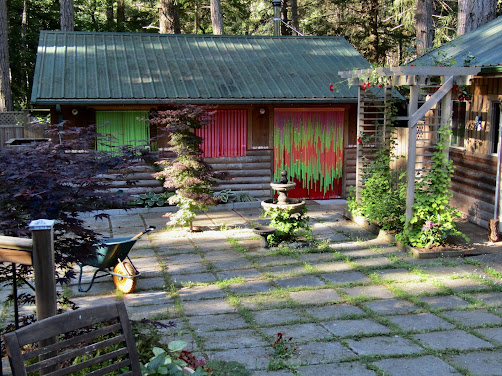 I put up the second half of the studio door curtain and I’m thrilled with the result. I’ve mounted the curtains for both the door and the windows on a board so that I can take them down and store them indoors for the Winter. The new section still isn’t dry, but I think the bonds will hold.

Once that was done, Her Highness and I went for our first walk while it was still cool. And then I came home to work on the yard, glad that there was no mowing to do. I did a lot of little things—transplanting, sweeping, border building—things that I’ve wanted to do for ages. It is so satisfying to get so many little tasks checked off my ‘to do’ list.

Then it was time for weeding the lawns. A backbreaking task, but so, so satisfying to do. I filled the wheelbarrow to overflowing with weeds. Then I decorated the tree at the entrance to the driveway where my address is, using the surveyor’s tape with which I made the studio outdoor curtains. 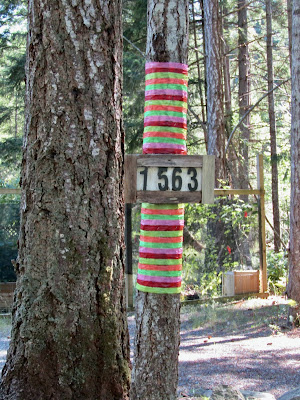 I had lunch and finished my long list of books read and on hand for future reading, and then I bundled all the books I had read (except a few favourites) and took them to Tailin to add to her little street ‘take one, leave one,’ library. Her Highness has a sore paw and so long walks were out. I washed her foot and put Polysporin in the cracks of her paw and then put her foot into a nice thick wool sock.

And then I did nothing. I felt too tired to do anything in the heat of our currently very hot days. I chilled with She With Sore Paw. I had dinner and after dinner, I went out to the wasteland to walk about and ponder what to do with it. I have oodles of desire for this project, but only a soupçon for doing the physical labour.

More Lawn? Possible. A pond? Impractical. And then, there was Issa looking at me over the fence—the most adorable child ever. She is a festival of smiles. I am totally, exuberantly smitten. Merrill was holding her up so I could see her. Leo was in the background. And Merrill brought up the gate/fence repair. I am super happy about that. There’s always a joyous atmosphere when we’re together.

This will be where they access my property. They will come in through the gate into the wasteland. It was a sign. I had to do the wasteland one way or another, and the way I know is to do lawn. And I’ll put some plantings on either side of the gate when it goes in. So now: Weeks of daily physical labour. I must focus on the reward. I will bitch, but I will persevere.

A billion years ago when I was in my thirties, I asked my GP if I should be worried about only sleeping for about four hours a night. That led to me seeing some doctors at UBC Hospital who ran a sleep lab where I had some tests. They told me I was a very healthy guy and, seemingly, a part of a small percentage of the population who do well on very little sleep. Thenceforth, I often heard from them or people from other universities, or people doing studies or doctorates, wanting me to answer questions on a survey. I did every one and, in turn, I was sent material to read published by my inquisitors.

Well … Here’s what I read on the CNN website today:

By 2009, the team published their first finding: There was a mutation in the gene DEC2 which caused short sleepers to stay awake longer. Since then, the team has discovered two more genes -- anADRB1 mutation and a NPSR1 mutation -- which alter neurotransmitters in the human brain to create short sleep.

During each of these studies, the team bred mice with the same genetic mutations to test the gene's function. The results: Genetically altered mice also slept for fewer hours, with no negative health effects.

As is evidenced hereafter, I love my little patch of heaven: Pinecone Park. As plants mature, it’s beginning to look more like a park, and right now the Ocean Spray is coming out giving the garden fullness and a fragrant air. Here are some photographs: 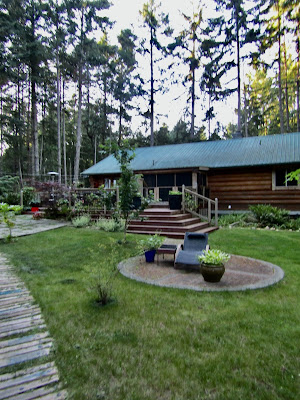 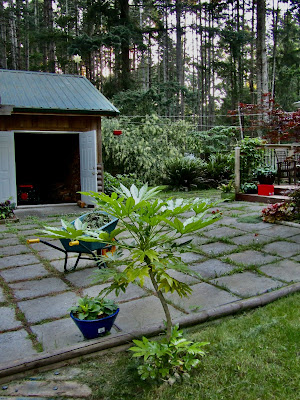 Posted by Chris Tyrell Loranger at 6:15 AM