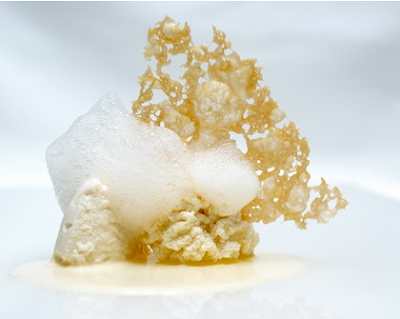 I met Massimo Bottura via the fabulous Netflix series Chef’s Table (that has just been renewed). Not only is he incredibly charismatic, generous and enormously talented, the story of his route to fame — his restaurant, l’Osteria Francescana is rated the third best in the world —is amazing.

He lives and works in Modena. When he established his restaurant there, locals were not interested. He is a culinary genius; his mission was to take the essential recipes of Italian cuisine and reinvent them, but the locals wanted their traditions preserved. Then, in 2012, an earthquake struck Modena.

The earthquake damaged the warehouse where the regions famous cheeses were made and stored. Modena is famous for parmesan reggiano; the warehouse contained the entire inventory of all the local farmers and the thousands of damaged wheels meant that many local farmers were facing bankruptcy.

The people of Modena pondered solutions and Massimo Buttaro had an incredible idea. He invented a recipe — I believe it is his recipe called The Five Ages of Parmesan Reggiano (pictured above) and told the culinary world. He told the western world’s greatest chefs and restauranterus about the problem with the damaged wheels and possible ruin of local farmers, and they all put his recipe in their repertoire and menus. Soon every single damaged wheel was sold.


Do stories get any better than that? He became a local hero, of course, and now locals flood his restaurant along with gourmets from all over the world. 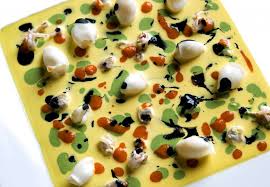 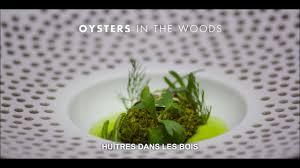 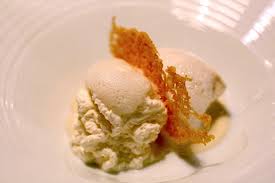 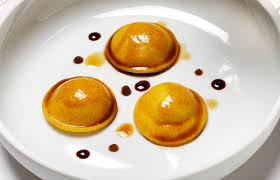 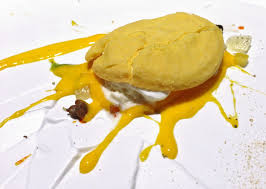 The plate above is the "broken lemon tarte." One day a sous chef he loves dropped a plate with a lemon tart on it and he felt sick about it. But Massimo's response deeply moved the sous chef (and me). He picked up the unbroken plate with the shattered tart on it and then broke its pair. They were about to serve two tarts and both were served "broken," and all lemon tarts have been served "broken" ever since. Can you hear my tears? 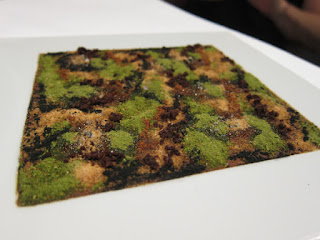 And this plate, called Camouflage, is my favourite as far as looks is concerned. This photo does not do it justice. It looks absolutely amazing on the table.
Posted by Chris Tyrell Loranger at 8:40 AM
Email ThisBlogThis!Share to TwitterShare to FacebookShare to Pinterest

Hello,
Picked up your piece this morning. You might care to update it so that it reads that Osteria Francescana is currently ranked number two in the world by The World's 50 Best Restaurants awards. Goodness knows where it will come when the new list is announced in New York in June this year. Also Massimo's sous chef dropped the lemon tart on the kitchen pass and didn't drop a plate ... but these are minor matters and I hope that you continue to enjoy France, the food and the blog that you have created. I haven't brought your post to Massimo's attention yet.

I regret my errors and appreciate your corrections, Spoon HQ. I discovered Mr. Bottura via Netflix and only yesterday bought his book Never Trust A Skinny Italian Chef wherein I hope to learn more and more correctly about this fabulous man and cuisiner. Thank you very much for your comment. It was to read that last sentence; I am overjoyed to be so close to a man I so admire. The tart story revealed such a beautiful heart and mind.