I had good energy Tuesday morning. The sunshine was inspiring. I did a whack of errands and then decided to have a spa. But no! Her Highness wanted her walk—and right away! So off we went, and again, it was short. My dog pals think she’s sprained her paw.
Dwight called. It’s like having a twin, with Dwight as a friend. I’m terribly proud of him because he’s on a panel of experts advising collectors on BC Design being hosted by the Vancouver Art Gallery.
At 10:00, a migraine hit. I am so  fed  up! (At least they aren’t nearly as bad as when I was a kid!!) I’m hoping again this morning to have no headache today.
The afternoon was warm out and sunny. I took Her Highness for a second short walk and had a truly glorious spa before Adrienne arrived to look at Sheba’s paw. She couldn’t feel anything, so Regina’s diagnosis of a sprain is the one we’re going with.
I felt decent in the evening. I did not feel the post-migraine sluggishness I often feel so I watched The Light in the Piazza on YouTube. What a fantastic and absolutely beautiful musical it is. I loved it; I love musicals and this one is a doozy.
It’s music and lyrics are by Adam Guettel. I knew his father back in the day. His father ran TKTS in Times Square and so whenever I went to NYC, I’d meet him first thing in the morning to get my pick of the half-price tickets for the day without having to line up. (Adam’s mother was Mary Rogers; she was the granddaughter of Richard Rogers.)
Today is brilliant again and we’re likely to have great weather for quite a while. What a change! It’s like emerging from a cave after all the rain and grey skies that we’ve had since summer so abruptly ended.
I’m joining the dog-walking group this morning. Sheba is showing signs of recovery but I’m going to continue to keep her from running for another week at least.
I suspect her injury is the cause of my migraines. My mind wants stasis… balance… everything working and everything in its place. It wants peace in the kingdom. I had a dozen migraines in the two weeks leading up to Steve’s visits and I suspect Sheba’s injury is equally as “huge” a deal to my brain.
•
I soaked some leaves and dried them between towels under weights and they have dried beautifully flat, so I’ll be soaking all my leaves and re-drying them for my next papier-mâché sculpture.
•
Ethel has bloomed. She’s gained a lot of weight and looks positively robust now. It seems clear to me that she came to me with the intestinal blockage that had to be surgically corrected shortly after her arrival, and it stunted her growth. She’s remains much smaller than elephantine, Fred, but she radiates good health and I’m so pleased to see it.
•
Today’s big job is starting my generator. I kind of hate using it’s very noisy and I associate it with wet and cold and storms. But I have to ensure it’s in working order so I’ll run it for a while (I hope) to make sure I have emergency power should we get a blaster of a storm. 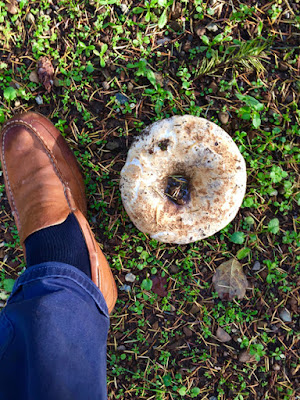 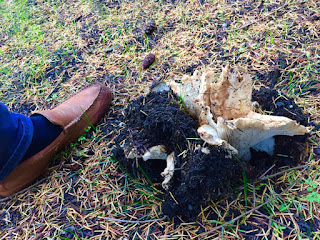 These giant mushrooms are emerging in several places in my yard. They are one species of very. very many that are coming up wherever they can—through the rocks of my driveway, between the paving stones, all over the lawns  and gardens and along all the borders. They are ugly and beautiful at the same time. 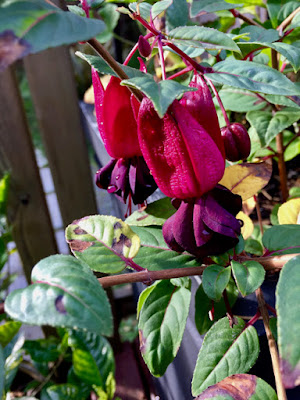 Posted by Chris Tyrell Loranger at 8:12 AM