It feels Autumnal in the mornings now.
I was glad for the cool weather yesterday because I went back to my usual busy life. My infection has subsided and I got a brace for my wrist, but I committed myself to working sensibly and not getting overheated.
I diassembled one big palette after the dog walk, then had a spa and went into the village for lunch and to get the landscaping pins I’ll use to fasten the planks down.
It was Summery in the afternoon— absolutely gorgeous, in fact! There were wild Turkeys with their youngsters in a Sheep paddock I passed on my way to the village, and a doe and her two fauns, their spots now barely visible, were on the Commons grounds as I passed by. I am giddy in love with this place.
I deconstructing a second palette in the afternoon and I felt really good to be so close to finishing with the hammer and crowbars and that I can return the tools to Jay. Cookies were consumed; a second spa was had. I’ll disassemble the last palette today and load all the wood into the shed where I’ll clean and trim it.
•
Tory and Keith sent me a fabulous little invention: It’s a little heater—actually a light—that will keep the hummingbird nectar from freezing in winter.
•
Thanks to Beth’s recommendation, I watched Diagnosis,  a co-pro between Netflix  and  the New York Times  and it was really interesting—especially the last couple of episodes.
In one, anxiety causes a young man’s heart to stop and separations and family upheaval were to blame for causing his potentially fatal symptom. My symptoms are not nearly so dangerous, so I am lucky, but we both suffer due to poor or absent parenting. His episode made me realize what anxiety can do to a person.
In another episode, a woman rejects a psychiatric diagnosis for her episodic paralysis doctors because she doesn’t want to be labeled as “a crazy lady.” She actually disgusted me because she’s ashamed to have what I have.
•
I’m on the cusp of winding up this backyard project that began in May. Next week I’ll get the soil and seed. And I’ll lay some wood to see if I like how it looks. I have variations on to try: Planks touching each other but staggered at the ends, or planks with soil between them that I’ll seed with clover (also with staggered edges). 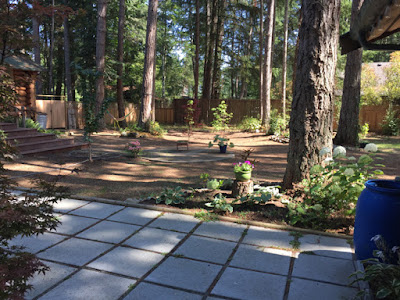 Posted by Chris Tyrell Loranger at 7:25 AM
Email ThisBlogThis!Share to TwitterShare to FacebookShare to Pinterest